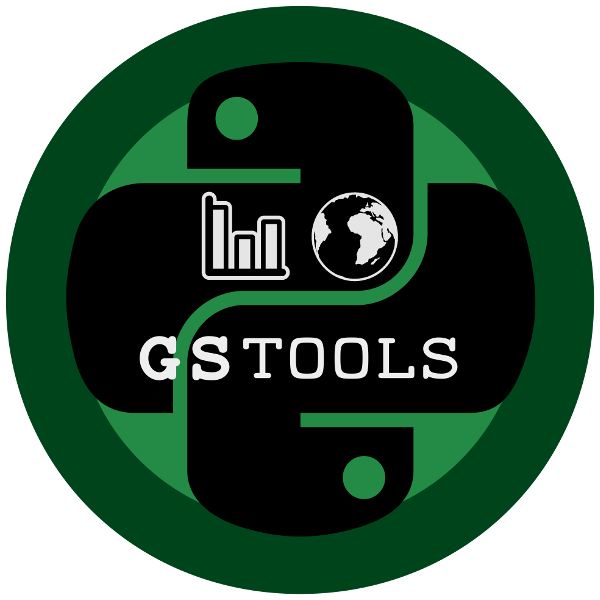 GSTools can be installed via conda on Linux, Mac, and Windows. Install the package by typing the following command in a command terminal:

In case conda forge is not set up for your system yet, see the easy to follow instructions on conda forge. Using conda, the parallelized version of GSTools should be installed.

GSTools can be installed via pip on Linux, Mac, and Windows. On Windows you can install WinPython to get Python and pip running. Install the package by typing the following into command in a command terminal:

To get the latest development version you can install it directly from GitHub:

If something went wrong during installation, try the -I flag from pip.

Speeding up GSTools by parallelization

To enable the OpenMP support, you have to provide a C compiler and OpenMP. Parallel support is controlled by an environment variable GSTOOLS_BUILD_PARALLEL, that can be 0 or 1 (interpreted as 0 if not present). GSTools then needs to be installed from source:

Note, that the --no-binary=gstools option forces pip to not use a wheel for GSTools.

For the development version, you can do almost the same:

You can install the optional dependency GSTools-Core, which is a re-implementation of the main algorithms used in GSTools. The new package uses the language Rust and it should be faster (in some cases by orders of magnitude), safer, and it will potentially completely replace the current standard implementation in Cython. Once the package GSTools-Core is available on your machine, it will be used by default. In case you want to switch back to the Cython implementation, you can set gstools.config.USE_RUST=False in your code. This also works at runtime. You can install the optional dependency e.g. by

or by manually installing the package

GSTools-Core will automatically use all your cores in parallel, without having to use OpenMP or a local C compiler. In case you want to restrict the number of threads used, you can set the environment variable RAYON_NUM_THREADS to the desired amount.

If you are using GSTools in your publication please cite our paper:

You can cite the Zenodo code publication of GSTools by:

If you want to cite a specific version, have a look at the Zenodo site.

The documentation also includes some tutorials, showing the most important use cases of GSTools, which are

The core of this library is the generation of spatial random fields. These fields are generated using the randomisation method, described by Heße et al. 2014.

This is an example of how to generate a 2 dimensional spatial random field (SRF) with a Gaussian covariance model. 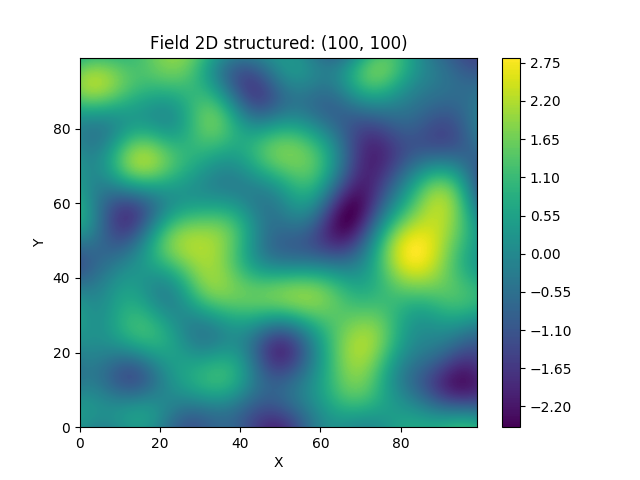 A similar example but for a three dimensional field is exported to a VTK file, which can be visualized with ParaView or PyVista in Python: The spatial structure of a field can be analyzed with the variogram, which contains the same information as the covariance function.

All covariance models can be used to fit given variogram data by a simple interface.

This is an example of how to estimate the variogram of a 2 dimensional unstructured field and estimate the parameters of the covariance model again. 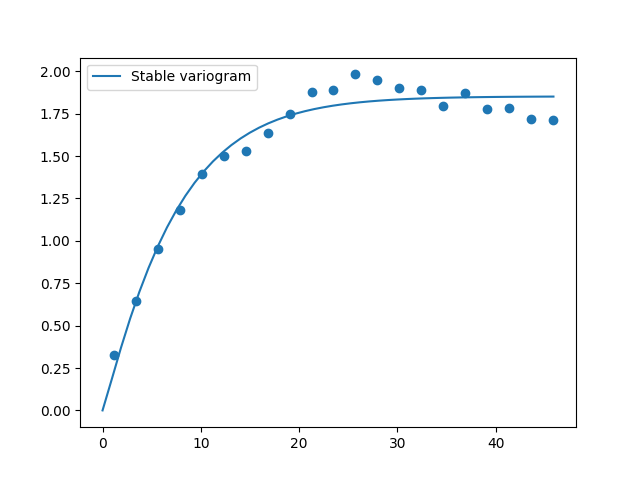 An important part of geostatistics is Kriging and conditioning spatial random fields to measurements. With conditioned random fields, an ensemble of field realizations with their variability depending on the proximity of the measurements can be generated.

For better visualization, we will condition a 1d field to a few “measurements”, generate 100 realizations and plot them: 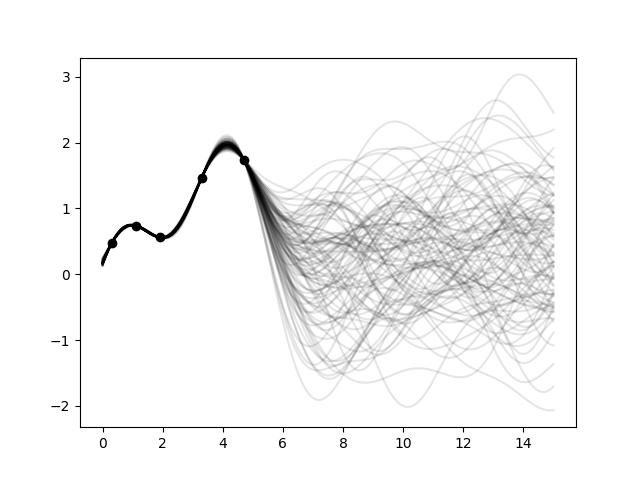 One of the core-features of GSTools is the powerful CovModel class, which allows to easy define covariance models by the user.

Here we re-implement the Gaussian covariance model by defining just the correlation function, which takes a non-dimensional distance h = r/l

And that’s it! With Gau you now have a fully working covariance model, which you could use for field generation or variogram fitting as shown above. 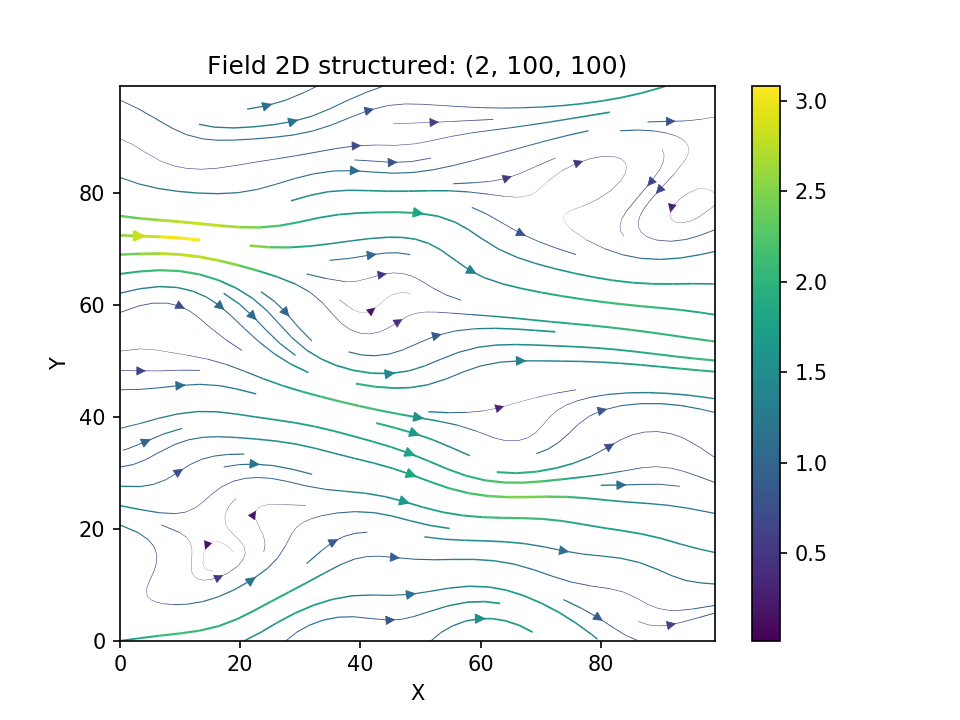 After you have created a field, you may want to save it to file, so we provide a handy VTK export routine using the vtk_export() or you could create a VTK/PyVista dataset for use in Python with to to_pyvista() method:

Which gives a RectilinearGrid VTK file field.vtr or creates a PyVista mesh in memory for immediate 3D plotting in Python. 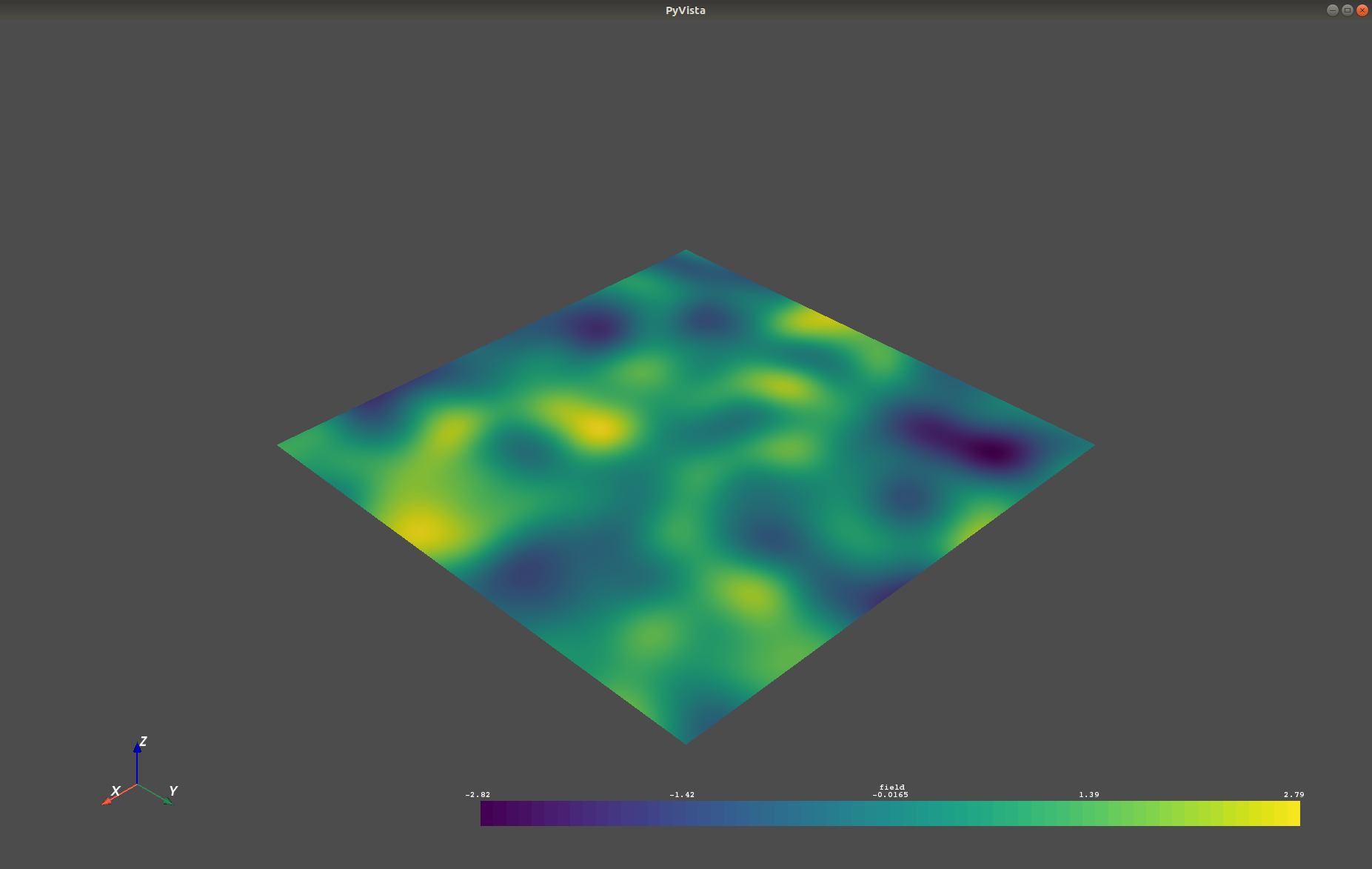